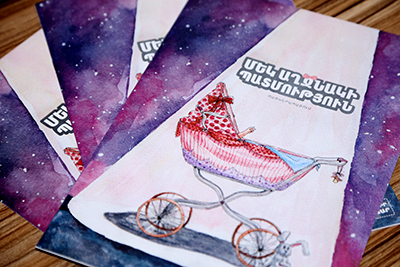 The international researches have resulted in the facts that about 1400 girls are not born in Armenia based on gender biased selection. If the phenomenon of the gender biased selection continues at the same rate, than based on preliminary predictions Armenia may lose about 93000 women and future mothers by 2060. The yearly number of unborn girls may reach up to 2000 by 2060 and gender disproportion can affect the possibility of family formation in Armenia. As a result of the substitution of boy to girls, the number of Armenian population can decrease up to 80.000 people.

“A Story of a Girl” is disseminated in public areas in Yerevan. The comics-newspaper has one goal: to voice out this issue of utter important through the medium of art and make every member of society direct carrier of the message in the sharing is caring format. Each member of society realizes that he/she can directly contribute to the abolition of the issue in Armenia and with his/her support another girl will be born tomorrow.

The comics-newspaper has been published within the frames of “Combating Gender Biased Selection in Armenia” project funded by EU is implemented by 4 organizations which are International Center of Human Development, Save the children, Armavir Development Center and Martuni Women Community Council. Many other project are being implemented throughout the entire territory of Armenia aimed at reducing the number of gender based selection in Armenia.

“Story of a Girl” comics newspaper was disseminated to general public in close cooperation with local and international organizations. Because of its strong artistic representation and social context, the “Story of a Girl” was invited to be presented at ReAnimania International Animation Film & Comics Art Festival of Yerevan and at the “Comics Day” event organized by TUMO Center for Creative Technologies.